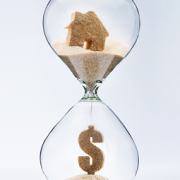 Property investment has long been one of the more successful strategies to achieve financial independence, and yet statistics show only about 20% of us do it.

Why has property been a strong contributor to wealth creation? In general terms wealth is created through capital growth as your property value increases over time. Of course this is only
true if the capital gain on the property is greater than the cost of holding it.

Challenges in entering the market

The ability to purchase a property depends on providing the required deposit and being assessed as having the serviceability to repay the loan. Although many of us may have the ability to make
monthly repayments – particularly in an investment scenario where rent could cover a good proportion of repayments – the challenge is that many of us find it difficult to save the deposit.

Is there a solution?

This is where your first property comes into consideration. If you have held
this property for a number of years it is likely your property may have increased
in value. Perhaps you’ve also made additional loan payments? Either one or both of these factors may have created equity in the property.

Rather than saving the deposit you could now borrow the deposit by using that equity as security.

So how much deposit do you potentially have in the equity of your first property?

Where wealth creation is your aim you should consider channelling all your surplus funds to paying down your non-deductible debt (or place these funds in an offset account to minimise non-deductible interest).

Offset accounts can be a very effective tool for providing flexibility. Unlike a redraw facility the funds are generally available instantaneously allowing you to withdraw the funds at any
time. This availability may allow you to move quickly with the purchase of an additional property.

Using an offset account effectively will depend on whether your first property is an investment property or your home. Your individual circumstances will determine the suitable approach to
maximise your financial position. As your finance specialist we can certainly help you with that!

Typically, investment properties that
have been 100% funded with an investment loan will result in an income
loss, ie the rental income is insufficient to meet the interest and ongoing costs
of maintaining the property. This is commonly known as negative gearing. This loss can be claimed as a deduction in your income tax return.

You are also able to fund this income loss through a loan with the interest costs/charges on the loan also being tax deductible.

Rather than using your ordinary income (that could otherwise be used to pay down non-deductible debt) you could use the equity in your first property to apply for a line of credit. The line of credit could then pay for the portion of the operating expenses that are not covered by the rental income of the property.

Where to from here?

As your finance specialist we are here to help you explore solutions suitable for your personal situation. We understand that most people struggle with the concept of purchasing
an investment property when they are still paying off their ‘home’. Perhaps you’re not too sure what steps to take to put yourself in a suitable financial position to purchase an investment property? Well you’re not alone!

We welcome the opportunity to discuss your concerns and assist you to make decisions suitable for your individual circumstances. Feel free to call the office for a chat at any time. 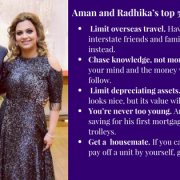 From pushing supermarket trollies to owning half-a-dozen properties – all without a dime of family support.

Aman and Radhika Bhandari have proven that anyone can a buy property – or six – through determination, goal setting and some sacrifices.

The couple’s path to achieving the great Australian dream started when Aman, then-17, arrived in Canberra from one of the most populated cities on earth, New Delhi.

Ask Aman what that was like and he can’t help but laugh.

“It was a massive shock. There were no people!” he says.

To keep himself busy, Aman spent the next five years studying and working, hard.

“I worked 20 hours a week as a student and full time during the holidays. I pushed trollies, drove a cab, worked in a bakery – whatever I could get my hands on.”

The hard work soon paid off and at just 23, Aman bought his first property – a two-bedroom unit in Sydney’s Pendle Hill.

His CV now reads Director of Solution Sales for global software company SoftwareONE, after working up through the IT ranks of Telstra, Fujitsu, Coca-Cola Amatil, Lloyd’s and UXC.

When Radhika arrived in Australia at age 20 she was also keen to study, work hard and build a new life. For her and Aman, it was a meeting of minds and ambition.

“The first thing Aman asked me was ‘do you want to go back to India?’ And my response was ‘no’,” she recalls.

“And then he asked why, and I said ‘because I feel this country is exactly what I want.’ We’re just so in love with the multicultural environment this country offers.”

They got married soon after.

Radhika and Aman initially shared his Pendle Hill apartment with a flatmate. But they soon decided they wanted a place of their own.

“We promised ourselves we wouldn’t visit family in India until we had bought a house for ourselves. And we didn’t go back for the next five years. We made everyone visit us!” recalls Radhika.

Radhika took a job at a university, and Aman started working in IT. After five years, with no overseas holidays, they bought a four bedroom, two story-house. Then another house in Melbourne. And then another. And another…

Each property the couple has purchased has been through leveraging off the property before, scrupulous saving, and the trusted lending advice of Indigo Finance.

But their real pride and joy? Well, that honour goes to their two-year-old son, Aiden.

They believe their story proves that, despite the intimidating cost of properties on the market, Australia is still the land of opportunity for any new family.

“I tell everyone Australia is the place. If you put your heart to it and seek good advice, you have all the opportunity that you want,” says Aman.

If you’d like our help in fulfilling your own Aussie dream, call us on 02 9194 2260 or email enquiries@indigofinance.com.au. 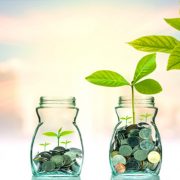 If you think you have to be wealthy to invest in property you might be mistaken! In fact the skills and experience you’ve gained managing a budget on a lower income could make you a better property investor than some big spending high income earners.

We often meet people who are hooked on the good life: living in expensive suburbs, driving fancy cars, frequently dining out and taking overseas holidays. Many will have built their wealth through a successful investment strategy but you may be surprised to find out how many don’t have adequate savings for retirement or redundancy, let alone a solid investment plan.

Why people DO it

Around 20% of Australians invest in property for:
• potential capital growth
• rental income
• tax benefits
They:
• tend to consider property one of the more solid, less volatile forms of investment because you can actually touch bricks and mortar
• like the feeling of getting ahead financially
• don’t want to be one of the 80% of Australians who have to rely on the aged pension when they retire

Around 80% of Australians don’t invest in property because they:
• don’t like debt
• need more information to take the first step
• don’t know how to ensure their investment property is not threatened by interest rate rises or unreliable tenants
• aren’t sure how to pick appealing properties for good rental return
• don’t realise they can probably afford it – even if they don’t have a big salary
• think all debt is ‘bad’ and haven’t realised an investment property could make them money and
even pay for itself

Will you be part of the 20% OR will you be in the 80% of Australians who will need to rely on government support at retirement?

If you don’t act, nothing changes. Remember:
• You most likely have some good equity in your existing property.
• Financial institutions support lending to investors if they meet their lending criteria.

Lower income earners are often the ones who knuckle down and save. Careful budgeting, motivation and discipline are very important attributes of successful investors. If you have had plenty of practice stretching your dollar further and living within your means, you might already have what it takes!

Lower income earners can often have a more realistic view of investment risk.

They know they need to do something to get a better financial future. Many people are hesitant to invest because they just don’t like having debt. That’s a fair call… but you can reduce your risk.

We can help you look at property investment options suitable for your own financial situation now and in the future.
We can calculate how much you could afford to borrow to invest or explain how to use your home equity to allow you to get ahead financially with limited risk.